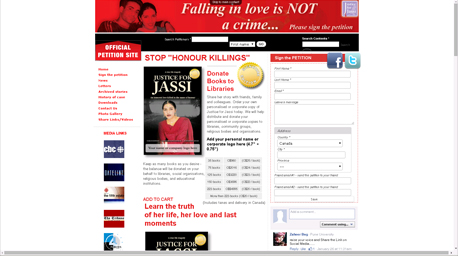 Background: Jassi Sidhu was a young girl born and raised in the city of Maple Ridge, Canada.
In her early 20’s , she was murdered by her family, specifically her mother and uncle, after marrying someone they did not approve of. Her story has generated worldwide attention from media outlets like MSNBC, CBC, BBC, The Times of India, and dozens of other leading international outlets.

The Work: Our team has worked closely with Vancouver’s Post Newspaper group to keep Jassi’s story alive in the press. We built and maintained the website www.justiceforjassi.com which included a worldwide petition signed by thousands of people calling for justice in her murder.
Our team also assisted in the copy-editing, and composition of the book Justice for Jassi co-authored by The Province’s editor Fabian Dawson and Vancouver publisher Harbinder Singh. Eventually the media pressure maintained by these two along with the website played an instrumental role in extradition proceedings against Jassi’s mother and uncle.
In 2014 they were ordered by a BC court of law to be sent to India to face murder charges.