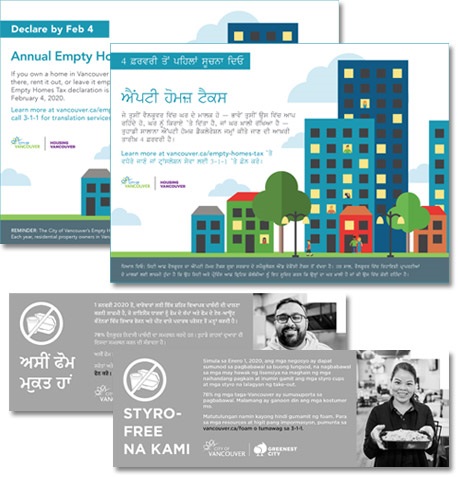 BACKGROUND: Vancouver is Canada’s third largest metropolitan region. It is Canada’s Pacific Rim gateway to the Asia and one of the most multicultural cities in the world with over 1 million people from Asian heritage living in the British Columbia’s Lower Mainland.

The city is a growing tech hub, and cultural industries hub. Vancouver is consistently named as one of the top five worldwide cities for livability and quality of life and the Economist Intelligence Unit has acknowledged it as the first city ranked among the top-ten of the world’s most well-living cities for five consecutive years.

OUR WORK: Our Vancouver multicultural marketing team assisted the City of Vancouver in sharing its message with the city’s South Asian, and Filipino populations. Our ethnic advertising experts executed campaigns in English and in other Asian languages. Our services included media recommendations, execution, and reporting.